This function acts similarly to the “Send” metacontroller, but is enabled & disabled via key combination.

This function is turned on and off from any layer by pressing [L3] and [R3] in combination. When active, notes in this layer, instead of playing, are sent to whichever layer is indicated by the midi channel layer attribute. (i.e. “midi channel” = 1 means send to layer 1 etc.). They operate exactly in the same way that MIDI recording does.

The screen changes to be the following: 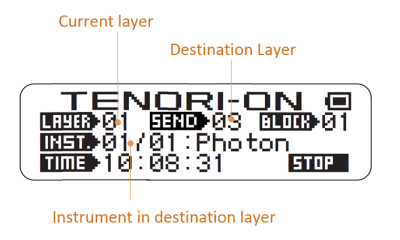 This enables, for example:

First included in A036